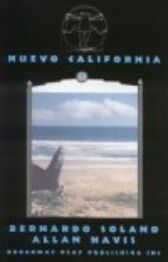 "The year is 2028. A massive earthquake has reconfigured Southern California, wiping out Los Angeles and Orange County

The whole region has to be reconceived. In a controversial move, a new city-state has been proposed, combining San Diego and Tijuana into one cross-cultural community known as Nuevo California

So the wall is coming down and there's a Mexican-American pope who comes to the region to bless its demolition. What follows is a wild mix of fantasy and reality-chaos and crisis, murder, mystery and a budding bicultural romance-all played out by Mexicans, Anglos, Asians, blacks, Jews, Muslims and Kumi Indians" ~ Robert Siegel - N P R News