Now the Cats With Jeweled Claws & Other One-Act Plays 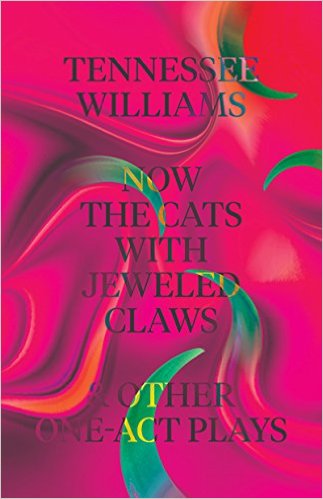 "The peak of my virtuosity was in the one-act plays ... like firecrackers in a rope"

This collection of apocalyptic unpublished plays contains some of Williams's most potent, comical and disturbing short plays

In Steps Must Be Gentle, poet Hart Crane is confronted by his mother at the bottom of the ocean

And in A Recluse and His Guest we meet a tall person of indeterminate gender who - we later discover - is a woman named Nevrika whose destiny is to always move forward, never back

The Demolition Downtown reveals the harsh realities of a now white-hot civil rights movement through the haze of America's increasingly desperate materialism. Two gorgeous young couples in cocktail attire struggle to play out their daily lives with the panache of young executives - in denial to the end - as the explosions grow nearer and nearer

"Now the Cats With Jeweled Claws is a loopy send-up of New York society, written in a gleefully absurdist mode" ~ The New York Times

"A Recluse and His Guest has remarkable language; indeed one listens for how the Master keeps showing up in late-career scripts" ~ The New Yorker

"Steps Must Be Gentle provides a tantalizing peek into Williams's preoccupation with death, suicide, and creativity" ~ Chicago Reader

"The Strange Play and Ivan's Widow make for intriguing theater, both in their own right and as a part of the legacy of Tennessee Williams ― a playwright who prowled the world's dark corners long before, and long after, he shone under the bright lights of Broadway" ~ The New Orleans Advocate

"The Demolition Downtown wrings laughter from the plight of a couple whose lives have been ruined by a new political order bent upon demolishing, literally and otherwise, the lives of its citizens" ~ Backstage, Los Angeles