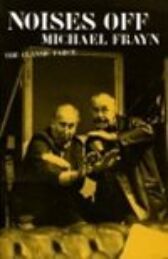 This is a new edition of Michael Frayn's classic farce, which the author has revised for the Royal National Theatre's revival in September 2000 ...

Noises Off is not one play but two - simultaneously a traditional sex farce, Nothing On and the backstage farce that develops during Nothing On's final rehearsal and tour

The two farces begin to interlock, as the characters make their exits from Nothing On only to find themselves making entrances into the even worse nightmare going on backstage, and exit from that only to make their entrances back into Nothing On

In the end, at the disastrous final performance in Stockton-on-Tees, the two farces can be kept separate no longer, and coalesce into one single collective nervous breakdown.

Noises Off won both the Evening Standard and the Olivier Awards for Best Comedy when it was first produced, and ran in the West End for nearly five years