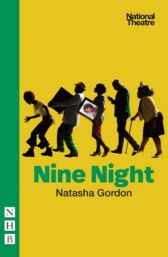 When her time comes, the celebration begins - the traditional Jamaican Nine Night wake

But for Gloria's children and grandchildren, marking her death with a party that lasts over a week is a test

And an endless parade of mourners

It premiered at the National Theatre, London, in April 2018

"Reverberates with authenticity [has] a great warmth of characterisation" ~ Daily Mail

"Gordon's intense, moving play pulls the focus tightly on a mourning family, and the mingled strains and comforts that tradition offers ... her humour isn't cautious: it's unafraid to poke at racism, colourism, and the insults traded as Jamaica and Britain stare each other down, across centuries of brutal and oppressive history the play says so much about how we rely on family for validation, for confirmation of our identity, putting a weight of need onto them that they sometimes just can't fulfil. And it points to the cathartic power of ritual, too, in a culture whose burial rites are miles away from traditional England's sad, grey funeral teas" ~ Time Out

"The beauty of Nine Night is in the ordinariness of it. The mainstream delivery of black stories is often too often overtly political. Brutalised bodies and violent racism is disturbingly normalised in black British theatre. But what we have here is a pure tale about a regular family, dealing with a regular fact of life. This play is a gift, and you'd do well to go and receive it' ~ The Stage