My Sweetheart's the Man in the Moon 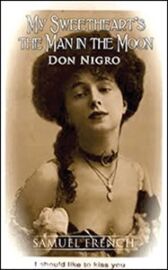 In the first years of the twentieth century, Evelyn Nesbit, the beautiful, teen-age pin up and chorus girl, was the entrancing center of an explosive and deadly love triangle involving Stanford White, her married lover and the architect of many of the most famous buildings in New York, who liked to push her naked on a red velvet swing

And Harry K. Thaw, the wealthy, manic and demented roller-skating Pittsburgh playboy who married her, beat her with a horse whip, and eventually shot White through the eye socket during a musical performance at the rooftop theatre at White's Madison Square Garden

This wickedly funny play chronicles the grotesque events leading up to and after this notorious murder and Evelyn's wild, strange journey through her American tabloid nightmare as she is hounded by carnivorous reporters, threatened, used, betrayed, bribed, stalked and nearly destroyed by the rich, the corrupt, the violent and the insane

"There was a bit of everything: wealth, fame, insanity, genius, and, in the middle of it all, a beautiful chorus girl ... The sensational story has been adapted for screen and stage ... but the latest play, Don Nigro's "My Sweetheart's The Man In The Moon," might be its most faithful version. It demonstrates admirable nuance and an impressive amount of research ..." ~ NY Times

"People who think Evelyn Nesbit is only a fictional character from Ragtime may find some surprises in Don Nigro's play, which chronicles the tawdry, twisted love triangle that "the girl in the red velvet swing" shared with master architect (and seducer) Stanford White and millionaire psychopath Harry K. Thaw" ~ Village Voice