My Mother Said I Never Should - STUDENT EDITION with Commentary & Notes 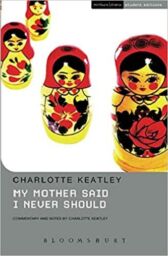 This follows the story of four generations of women - a great-grand-daughter, a daughter, a mother and a grandmother - grappling with social forces that threaten to split them apart as the twentieth century grows older

Widely studied on Drama syllabuses, the play moves back and forth through the lives of the women, it sets the enormous social changes of this century against the needs of the individual

'In its revelation of mother-daughter emotions over the years, the play is without rivals. It is a classic' ~ The Times

'This is a landmark play. The theatrical equivalent of breaking the four-minute mile; like Caryl Churchill's Top Girls, pointing the way for the next generation of playwrights in form and content' ~ Guardian

"A warm, poignant elegy about growing up, growing old and growing or not growing wise. It's about debts and responsibilities; the grim burden of puritan inheritance; and how it takes generations to learn about the value of real feeling" ~ London Sunday Times

This is the STUDENT EDITION