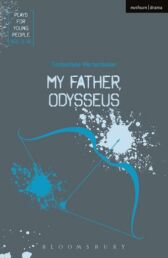 Large Mixed Cast
"He suddenly looks different, less bent, less old, less broken, what a strange man. Is there some magic here? Is he a wizard?

Telemachus' father left long ago to fight a war

Now the man of the house, he must step up to defend his father's legacy and protect his mother from the suitors that lounge around the court

Meanwhile, the great Odysseus has been trapped by the goddess Kalypso for ten long years

But now, lost in his memories of past glories, Odysseus longs to return home.

This timeless Greek myth has been reinvented by Timberlake Wertenbaker to create a modern, rich and powerful new work about a son searching for his father

And a father searching for himself