My Daughter Keeps Our Hammer 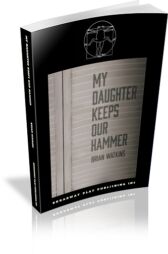 My Daughter Keeps Our Hammer follows two estranged sisters, one needy mother, and one intolerable sheep

Stuck in a forgotten prairie town, clashing sisters Sarah and Hannah unite when they attempt to housebreak mom's beloved sheep Vicky - the lone survivor of the family's former flock

And the sisters must choose ...

Or sacrifice their future?

"Part Sam Shepard gothic drama, part Moth Radio Hour yarn, My Daughter Keeps Our Hammer tells the story of Sarah and Hannah, sisters in their 20s, living with their ailing mother in the farm country and desperate for a way out

Or, rather, the sisters tell the story, addressing the audience in a series of monologues

Sarah, who mainly tends to their self-absorbed, needy mother, hopes to flee this prison of obligation and go to college

Before he deserted them years earlier, their dad left their mother two gifts - a pickup truck that each daughter sees as a means of escape, and Vicky - a sheep that becomes her beloved pet

"Brian Watkins shows a dizzying level of control in his ghoulish, Plains-gothic My Daughter Keeps Our Hammer - a short, nasty thriller of riveting literary quality. Plays rarely scare us: the dramatic form usually has too much light and interaction for true creepiness. But by using bare-bones storytelling, Watkins taps deep into reservoirs of dread " ~ Helen Shaw, Time Out New York