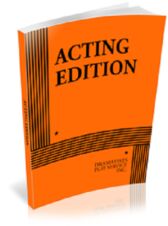 A respected member of the community, Dr Ronald Cato has prospered in carrying on his father's medical practice. But there are those who harbor suspicions about his past activities - particularly one patient, Walter Manning, who also suspects (correctly) that his wife and Dr Cato are having a clandestine affair

Manning has engaged a private detective to investigate Cato's past, and the evidence gathered is so damning (although Cato tries at first to discount it) that the doctor's only course is to murder his patient

His clever and coolly executed plan of action shifts suspicion to another patient, and suspense builds as it appears that the good doctor may have committed the perfect crime

In the end this proves to be not so, but the method of Cato's undoing - and the surprising twist which follows it - will keep the audience guessing until the final, shocking moments of the play

This gripping, spine-tingling mystery will hold audiences in suspense right up to the final, clever "twist" of its unexpected denouement