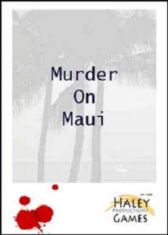 A luau - a traditional Hawaiian party or feast that is usually accompanied by entertainment.

And a great fundraiser!

There are 8 Primary Suspects

These will have full knowledge of the mystery & will each be given a complete script ...

Harold (Albert) Logan: The owner of the Pineapple Haven Hotel (it was part of his divorce settlement). His marriage to Stella Capwell was a big mistake but she was filthy rich and he did get this hotel from her and he did get to return to his place of birth. So why is she coming here tonight?

Bambi Bianca: Harold's girlfriend, or, as she says, fiancée. An ex-con who's clearly pure white trash and who'll use anybody and everybody if it works to her advantage

Stella Capwell: Harold's miserable and mean ex-wife from NY. She now realizes she was a bit too generous in giving this hotel to Harold. Her accountants have told her it could be a big moneymaker. So she's back and she has a plan - a plan that sends Harold and anyone associated with him back to the gutter from whence they came

Mrs. Abigail Wiggins: She claims to be an author and expert on island voodoo. While she'll gladly contribute to HAAL tonight, she also senses that something evil is going to happen but she just isn't sure what. She has an interesting connection to Stella

Donny Wo: A lounge singer. Harold hired him to sing at the luau but only after Donny barraged the man with daily calls and daily appearances. Harold didn't really want any entertainment - he has a tape deck and cassettes

Thomas Q. Magnus: A private eye. He and Abigail are chums and he's here at her request because of her premonitions. And like Abigail, he's an avid supporter of anything having to do with the preservation of Hawaiian tradition and lore. What turns out to be a bonus of sorts for Thomas is the fact that he'll get to confront Stella Capwell. She still owes him money for the job he did for her Rebel Hanukkaiiaihani: He's Harold's business partner. When Harold makes money, Rebel makes money. And vice versa. Nice arrangement. Unless they lose money of course

Ruth Astoria: Stella's daughter from her first marriage. A snotty little tramp with a bad, bad, bad attitude. She hates her mother, well, because she's her overbearing mother. She also has a love/hate relationship with Harold. Tonight may decide which it'll be: love or hate

Sadie Summer: Abigail's new very enthusiastic assistant who is in training (have her do everything Abigail does with complete and utter reverence for her mentor)

Chyna Doll: Rebel's girlfriend. She's a champion mud wrestler who will challenge anyone who rubs her the wrong way to a wrestling match. Rebel loves wrestling with her-he thinks it's sexy--but everyone else is just a little afraid of her, except Bambi who's up for the challenge of winning any fight. Robert: Stella's driver and generally abused go-fer. Stella needs to use him and abuse him. He's in love with her, being the masochist that he is, so he does her bidding immediately and without question

Mack and Matilda Titmouse: They won a free vacation to the Pineapple Haven Hotel. They're working class types who look like the tourists you love to make fun of. They have never been out of their little Podunk town and are beside themselves with exuberant touristy joy. They ask for everyone's autographs and take pictures of themselves with everyone and everything with wild abandon