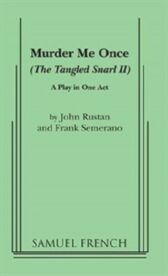 But who would want to kill Coins? Everybody!

The fingers of suspicion especially point to Coins' hot young widow, a woman with the kind of shape that makes two great first impressions

Then there is Coins' two beautiful grown daughters, one with a Girl Scout fixation; and the other with a head for figures, perched atop a pretty good figure of her own

Watch out, Spuds, danger is everywhere!