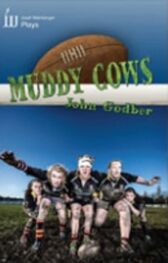 Lots of All-female fun from one of the UK's leading comedy playwrights ...

Scarfield Ladies Rugby Union FC have a tough time attracting enough members to turn out a full team most weeks, despite the best efforts of their captain Maggie

Forced to use tyres and oil drums for training, there's not even enough money for their own team shirts, and when promised sponsorship doesn't come through it looks like the writing is on the wall for the women's rugby team

But just as the team are facing their darkest hour and Maggie considers throwing in the towel, the girls hit on the idea of entering a Ladies Rugby Sevens competition with thousands of pounds on offer to the winners

Compounded by the conditions of their changing room

Seeing off three teams in succession as conditions gradually worsen, they discover that their final match will be a playoff against an invited team of professional women's rugby players from New Zealand

What chance can the Scarfield Ladies possibly have to win the tournament against such fierce opposition?

"There's discord and heartbreak, but it is leavened by sardonic, refreshingly bruising wit. Indeed this is Godber's consistently funniest play ..." ~ The Stage