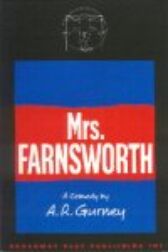 "This is set in a creative-writing class in Manhattan, run by a sardonic, harried teacher named Gordon

Class is under way when a resplendently well-groomed student makes a late and incongruous entrance - the pastel-clad Marjorie Farnsworth, fresh from the Connecticut suburbs and fluttering with apologies

It's the tale of a Vassar girl who becomes pregnant by a hard-partying Yale boy, who then pays her (by proxy) to have an abortion

Mrs Farnsworth's narrative starts to sound like a memoir in which only the names have been changed - could the boy in question be the young George W Bush?

The left-leaning Gordon is overcome with excitement

Despite surface evidence, Mrs Farnsworth is a registered Democrat, deeply concerned about the state of the nation and keen on making her tale public

There is, however, one serious problem, she says - her disapproving husband

It wouldn't be cricket, as the Farnsworths might put it, to divulge more

And although Mrs Farnsworth is essentially a debate play, there is nothing dry about it and little that's predictable

As Mr and Mrs Farnsworth present their respective cases to Gordon and his students, they reveal unexpected facets

Neither emerges as someone entirely to be trusted, but both come off as people of good faith

Which is more than can be said of the focus of their argument, Mr Bush, who by the play's end has been effectively cut open and found empty" ~ Ben Brantley, The New York Times