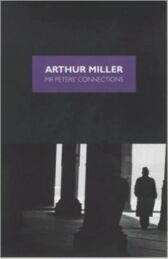 In addition to encounters with his loving wife, their daughter, Rose, and her boyfriend, Leonard, Peters also revisits his old lover, Cathy-May, and his resentful brother, Calvin, both of whom are long dead

But Miller's most original creation - and a creation of Peters' imagination - is Adele, a bag lady, who represents an incomprehensible black presence on the margins of the city's existence

Caught in this suspended state of consciousness, Peters' mind is free to roam "from terror of death to glorying in one's being alive" as Miller's play unfolds with resounding power

"The greatest American dramatist of our age" ~ Evening Standard