Most of What Follows is a Complete Waste of Time - Monologues, Dialogues, Sketches & Other Writing 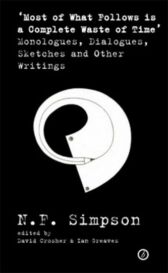 This collection brings together the best of master-Absurdist N.F Simpson's shorter and more 'experimental' writings for audiences new and old

Simpson was one of the principal playwrights in the Royal Court stable of innovative new writers until 1965, when he moved away from writing for the stage to producing radio and television scripts, including five plays, thirteen sitcom episodes, several monologues and dozens of sketches

At the turn of the century he re-emerged with the critically acclaimed play If So, Then Yes and an assortment of short experimental pieces that remain unproduced and unpublished

Also includes material Simpson was working on when he died, and had provisionally called Compilations 1