Most Likely To - The Senior Superlative Monologues 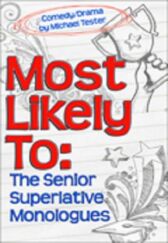 Employing a Senior Superlative Awards Ceremony as its unifying arc, Most Likely To transforms any stage into a platform that honors the serio-comic musings of teenagers labeled everything from Class Clown to Most Dramatic

Joining the usual cast of superlatives, we also have ...

Most Paranoid who dreams of "Harriet Potter"

Most Musical who plans her "Wicked"

Sweet 16, Most Overlooked who offers a concise history of bullying

And Most Athletic who strikes out with his girlfriend

And Almost Dramatic laments being typecast as "The Mayor's Wife"

Finally, the teen voted Most Likely To Think Outside the Box compares High School to "Star Wars"

The pieces can be used as stand-alone audition material