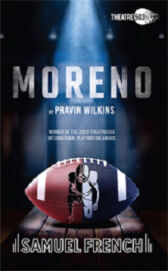 The NFL is being shaken by Colin Kaepernick's monumental decision

While other players join him in taking a knee, star running back Luis Moreno is all about his game - and his pay check

A record-breaking season is in sight ... but America's leadership is changing

When a destructive new reality hits close to home, Luis is forced to ask whether politics have a place on the field, and if he is willing to risk his career to take a stand for his own community

It was chosen out of 1,719 scripts sent in from 45 countries by a group of independent readers, the 503 team and a panel comprising Erica Whyman (Chair of Theatre503 and deputy artistic director, RSC), producer Caro Newling, actor/director Daniel Evans, arts journalist and reviewer Sam Marlowe, playwrights Roy Williams and Vinay Patel, and Theatre503 artistic director Lisa Spirling

Through powerful use of language and smart choices in the narrative, Wilkins attacks his theme like a master debater ~ Reviews Hub