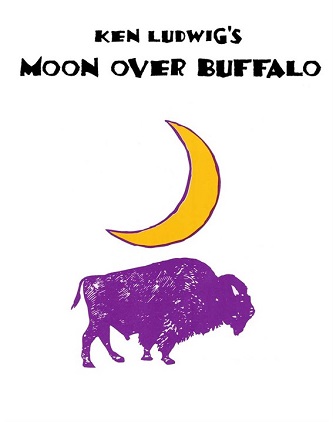 Will Charlotte Hay appear or run off with their agent?

Will George Hay be sober enough to emote?

Will Capra see Cyrano, Private Lives or a disturbing mixture of the two?

Hilarious misunderstandings pile on madcap misadventures, all of which are magnified by Charlotte's deaf mother who manages the theatre

This backstage farce by the author of Lend Me a Tenor brought Carol Burnett back to Broadway and also starred Philip Bosco as her megalomaniac, often drunk husband and leading man

"Hilarious ... building up its laughs methodically shtick by shtick.... Ludwig stuffs his play with comic invention, running gags ... and a neat sense of absurdity.... Go and enjoy" ~ N.Y. Post

"Somewhere up above ... George S. Kaufman, Abe Burrows, Moss Hart and all those clever fellows who wrote the comedies of yesteryear are rolling with laughter, echoing the audience last night at ... Moon Over Buffalo .... The play is nothing less than a love letter to live theater" ~ Boston Hearald