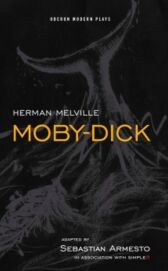 'It's true. It's all true for Moby-Dick. He's a killer, he's a fury, he's an angel of hell. Why if the white whale could talk he'd talk like Ahab'

Nantucket, 1851 - centre of a whaling industry that transformed blubber into the oils and candles that lit the world

He enrols under Ahab, Captain of the Pequod a man bent on destroying the white whale that lost him his leg

Certain the destruction of his nemesis will slake his thirst; Ahab's single-minded pursuit of Moby-Dick consumes Ishmael, the crew and finally the Pequod itself

All the spirit and atmosphere of Herman Melville's masterpiece romantic, ambiguous, characterful and rich with allegory is captured in this masterful adaptation

'Muscular and tersevivid and profound.' Time Out

'Armesto makes an impressive job of boiling down the sprawling tale of 19th-century whale hunting, groaning with endless digressions, to its essence ... a taut and ripping sea yarn which nevertheless hasn't lost the sense of Melville's epic quest for life's meaning' ~ Metro

'Armesto's adaptation captures not only this sense of pursuit of Ahab's blinkered need to keep going, whatever the cost but also the wider themes of the book, the primal tangle between predestination and free will, the holiness of whales ... from start to finish it exerts an incredible grip' ~ The Stage

'A bold and brilliant stage adaptation ... The script is well crafted, turning the dated but nonetheless adventure-filled novel, into an accessible show, full of the story's original poetry. This is two hours of immensely entertaining theatre, complete with gold doubloons, sea shanties and rum' ~ Telegraph