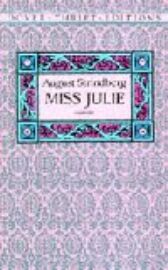 One of the greatest classics of modern theater-the fateful drama of a willful young aristocrat's seduction of her father's valet during a Midsummer's Eve celebration. Inspired by the new ideas of naturalism and psychology that swept Europe in the late 19th century, the play is reprinted here from an authoritative edition complete with Strindberg's critical preface, considered by many one of the most important manifestos in theater history