Miracle on 34th Street - the Stageplay 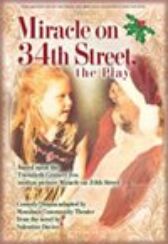 Large Mixed Cast
By chance, Kris Kringle, an old man in a retirement home, gets a job working as Santa for Macy's

However, he's seen as deluded and dangerous by Macy's vocational counselor, who plots to have Kris shanghaied to Bellevue Psychiatric Hospital

And especially at stake is one little girl's belief in Santa ...

"This is a tale that we want to believe in, that creates a world we seem to desperately desire, free of the blatant commercialism that surrounds us, where love and decency and generosity of spirit are their own rewards. What we want Christmas to be all about, really" ~ Santa Cruz Sentinel