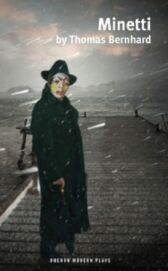 This one-man tour de force is set in the lobby of a Grand Hotel, New Year's Eve

While he waits patiently in the hotel lobby, Minetti's obsessive personality reveals itself in a series of strange encounters with other guests

He rails against outrageous fortune and unfulfilled ambitions, often colliding with crowds of young hotel guests who frequently burst in to celebrate New Year's Eve

As with King Lear, the storm which rages outside reflects his turbulent emotions until he finally finds peace and resolution

"Peter Eyre, performing in a translation he has written with director Tom Cairns, supplies a mordant, tragic and poignant epitaph for an old actor who has truculently passed his sell-by date Thomas Bernhard is commenting bitterly on the contemporary German theatre's obsession with reclaiming the classics at the cost of local new plays" ~ Michael Coveney, What's On Stage

"[Minetti] offered the real Minetti the comeback he was looking for, and gave the notoriously uncompromising Bernhard a chance to express some of his more trenchant opinions on art, theatre and stultifying provincial mores" ~ - Laura Barnett, Telegraph

"Gradually, as metaphorically the hours pass and the theatre director doesn't arrive, we become engaged in the agony of this character whose dreams of success have been shattered" ~ Barbara Bryan, Edinburgh Guide

Thomas Bernhard (19311989) was an Austrian novelist, playwright and poet and is widely considered to be one of the most important German-speaking authors of the postwar era