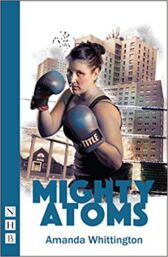 An All-Female drama from one of the UK's most popular playwrights ...

Taylor wants to play down her pro-boxing past, but for Lauren, Jazz, Aneta and Grace, the boxercise class is much more than a way to lose weight and have a laugh

They see it as a path to empowerment

The class meets in The Six Bells, which landlady Nora runs as her own community hub

The pub is threatened with closure, but the women refuse to throw in the towel

Instead, they agree to be part of an unlicensed Fight Night to raise cash and rally the locals

The Play was inspired by real-life local hero Mighty Atom Barbara Buttrick and premiered at Hull Truck Theatre in 2017, as part of Hull UK City of Culture