Me and My Girl - US Edition 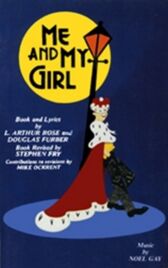 The late Viscount Hareford had a youthful, unfortunate marriage - and kept discreetly out of sight was a son and heir

There is a cockney invasion of the hall - Bill, his girlfriend and his mates, and the Lambeth Walk is danced by all

"A honey. It has humor, music, dancing, charm, wit and a deft expertise and that takes your heart away" ~ New York Post

"The freshest and funniest musical to hit Broadway in ages" ~ Newsweek

Me and My Girl premiered on Broadway at the Marquis Theatre in New York City, August 10, 1986

Directed by Mike Ockrent and choreographed by Gillian Gregorey