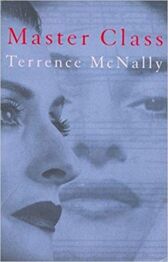 An accompanist sits at the piano

Callas' first "victim" is Sophie - a ridiculous, overly-perky soprano, dressed all in pink

Sophie chooses to sing one of the most difficult arias, the sleepwalking scene from La Sonnambula - an aria that Callas made famous

Before the girl sings a note, Callas stops her

She glories in her own career and flat-out seduces the audience, getting on her knees and acting the entire aria in dumb show, eventually reducing the poor singer to tears

But with that there are plenty of laughs going on, especially between Callas and the audience

As soon as Sophie starts singing, though, Callas mentally leaves the room and goes into a sprawling interior monologue about her own performance of that aria and the thunderous applause she received at La Scala

Callas wakes up and sends Sophie off with a pat

The next two sessions repeat the same dynamic, only the middle session is with a tenor who moves Callas to tears

She again enters her memories

This time we learn about her affair with Aristotle Onassis

An abortion she was forced to have

Her first elderly husband whom she left

Her early days as an ugly duckling

The fierce hatred of her rivals

And the unforgiving press that savaged her at first

Finally, we meet Sharon, another soprano, who arrives in a full ball gown

With Sharon singing, Callas is genuinely moved, for the young singer has talent

Nevertheless Callas tells her to stick to flimsy roles

That she's old, washed up

That she ruined her voice too early in her career

And that she only wants people to worship her

Sharon rushes out of the hall, and Callas brings the class to a close with a beautiful speech about the sacrifices we must make in the name of art

" ... an unembarrassed, involving meditation on Callas's life and the nature of her art. Such subjects are not easily dramatized, certainly not with this brio" ~ New York Times

" ... unforgettable, worth swimming to New York to catch" ~ Benedict Nightingale