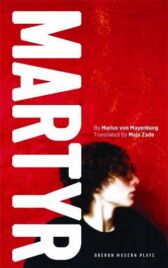 Benjamin won't do swimming at school

His mum thinks he's on drugs or has body issues

Martyr considers how far we should go in accommodating another's faith

"It is a play that lands like a primed hand grenade, spreading shock not just through its young audiences but also through the adults who see this wishy-washy liberalism, political correctness, tolerance of prejudices and casual neglectfulness of the young reflected back at themselves" ~ Lyn Gardner, Guardian

"The true test of anything made for younger audiences is whether or not it has enough to offer older people too. Martyr does. In spades" ~ Gay Times