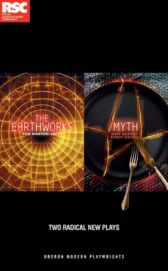 The two Plays in this Collection are ...

"The universe doesn't care if we know how it works"

On the eve of the activation of the Large Hadron Collider in Cern, two strangers a journalist and a scientist share their experiences of loss and hope in a funny but deeply touching one-act play

"I can only see wrong choices. Things that will make everything worse"

In one wine-fuelled evening, two couples debate their materialistic lifestyle

As their dinner party descends into chaos, their friendship and their lives are irreparably changed

"The Royal Shakespeare Company's Making Mischief festival is aptly named: the two short plays which make up the bulk of the festival of new writing initially seem like conventional domestic comedies, but belie more playful, complex ideas, teasing out themes of human comprehension and responsibility in the face of loss and disaster ... A double bill of mischievously deceptive plays" ~ The Stage