Made in Scotland - An Anthology of New Scottish Plays 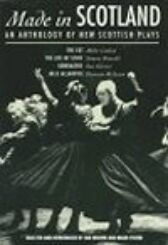 The Cut, by Mike Cullen is "A real discovery, an explosive thriller...Cullen's dialogue is demotic, foul-mouthed and occasionally bitterly funny, and the sense of violence and claustrophobia is often almost unbearably intense"

The Life of Stuff - "This brutally funny piece is almost unclassifiable. Imagine a collaboration between Joe Orton and William Burroughs and you will have some idea of Simon Donald's play: a ruthlessly and compulsively hilarious dark comedy thriller"

Bondagers, by Sue Glover "A striking experience...the mastery of the play was its rich, resonant musicality...All brilliantly structured, surging - with terrific dramatic energy"

Juliet Allardyce, by Duncan McLean "It is loud, coarse-tongued and funny, a series of affectionate, but telling snapshots which add up to a revealing portrait of the North-East as it is now" - Julie Morrice, Scotland on Sunday