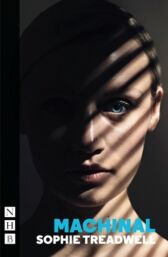 A visceral expressionist masterpiece, Sophie Treadwell's play Machinal was first seen on Broadway in 1928, London in 1930, and was later reclaimed as a 'lost masterpiece' in a landmark production at the UK's National Theatre in 1993

She follows the rituals that society expects of a woman, however resistant she may feel about them

She subsequently marries her boss, whom she finds repulsive

After having a baby with him, she has an affair with a younger man who fuels her lust for life

Driven to murder her husband, she is convicted of the crime and is executed in the electric chair

"A savage indictment of a hard, soulless world of mechanisation and money worship ... Beckett, Pinter and Mamet are pre-echoed in the staccato telegraphese, nagging rhythms and jangly repetition of dialogue ... A masterpiece" ~ Independent

"Machinal is a rare and disturbing beauty... conceived with the kind of tender, probing empathy you associate with the interiority of modernist fiction" ~ New York Times

"Gaspingly intense ... Machinal remains pretty extraordinary stuff ... feels like it could have been written yesterday" ~ Time Out

"A dazzling piece of work ... Machinal has lost none of its cold fury, its expressionistic power to depict a woman trapped by a society that expects her to marry and conform. It is astonishingly modern" ~ WhatsOnStage

"Captivating, intense and resonant ... a fascinating piece, a formally bold and explicitly feminist study of an ordinary woman who snaps under societal pressure ... demonstrates Treadwell's adventurousness as a playwright" ~ The Stage