Love Is Where It Falls - an account of a passionate friendship 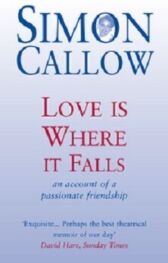 There was the age difference for one thing - Callow was barely 30, Peggy was in her 70s

And then there was the matter of Aziz, the handsome but mercurial Egyptian with whom Callow was already deeply in love ...

For the next eleven years, under Peggy's adoring tutelage, Callow underwent an education of the mind and heart that can have few equals

By the time Peggy died in 1991 - and Callow's account of her death is unbearably moving - he was a household name, but also, thanks to Peggy, an immensely more mature and complex human being

In this extraordinarily revealing memoir, Simon Callow tells the story of their all-consuming absorption in each other, quoting freely from their passionately unbridled letters

He captures the fiery intensity and reckless gestures, the bliss, the tenderness, the anguish of their love

This unforgettable love story is by turns, inspiring, funny and heartbreaking

It is also a courageously intimate tribute to a remarkable woman