Love in a Thirsty Land 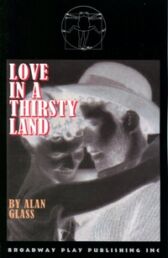 "What becomes of the old ways in the New World?

Inspired by an 1875 murder case in Brooklyn, Love in a Thirsty Land uses an adulterous love affair between immigrant Jews to address substantial and enduring issues like the future of Judaism in America, the attractions of assimilation and the temptations that pit inflamed flesh against a cold marriage

No play can be expected to do more than cast fresh and arresting light on problems like these, which have long defied easy solution

Yet in the end, with its innate intelligence and intensity, its vivid, sympathetic principals, its powerful love story, its air of mystery and its skillful evocation of a bygone era, Love in a Thirsty Land manages to maintain its grip on philosophy and religion while telling its wrenching tale of doomed young love ..." ~ Lawrence Van Gelder, The New York Times