Love and Other Acts of Violence 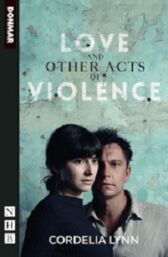 'There is a war coming... A war that will last for a hundred years... I think it is already here. I think we've been fighting it a long time'

As society splinters around them, the couple's struggle to survive erupts into violence

It premiered at the Donmar Warehouse, London, in October 2021, directed by Elayce Ismail

"Cordelia Lynn is a young playwright with a distinctive voice. She's serious, and poetic and comes at problems and ideas from unusual angles" ~ Whatsonstage