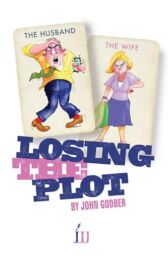 When art teacher Jack Munroe's life is turned upside down by changes at school, he turns his back on the world

He walks out of his job, his wife Sally, and his two teenage children

In his absence, Sally ploughs on running her flower shop as best she can, but as the weeks turn to months, the debts begin to rise

Something has to be done

And when Jack returns home unexpectedly, he discovers Sally has been writing a book

A book about him

A comedy destined to be a best-seller

Unlike the promising artist Jack once was, Sally has the popular touch

And with the publication of her book, Jack's foibles are now on show for all the world to see

And to laugh at

But as Jack and Sally learn to repair their relationship, we see their roles turn on their head with Jack happily running the flower shop and fielding phone calls for hot new celebrity Sally