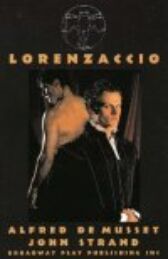 Recounted by playwright John Strand with clarity and directness, Musset's story of a society cowed by and despairing over its political leadership seems an apt one to tell just now. Its bitter conclusion is designed as a final dagger to the spirit ... Lorenzaccio speaks to our time, loud and clear" ~ Peter Marks, The Washington Post

"The play connects electrically and viscerally to our times ...

"If only George W Bush could have seen the gripping 19th-century French drama LORENZACCIO before being sworn in as commanderin-chief. Musset's play centers on the assassination of a tyrant. There's an occupying army detested by its citizenry. And there's the utter lack of a day-after plan once the repressive regime has been toppled, plunging the country into chaos. Sound familiar?" Mary Carole McCauley, The Baltimore Sun "French playwright Alfred de Musset's Lorenzaccio has long been a fixture in French theater but the 1833 play is seldom performed in the US

One chief reason is the absence of an English translation that addresses its unwieldy structure. Consider the problem fixed in this nicely accessible version from playwright John Strand

A welcome addition to American theater of one of France's cultural pillars" ~ Paul Harris, Variety