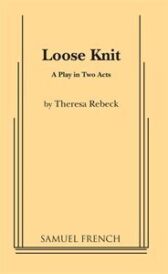 As the sweaters pile up, their lives fall apart. Liz is having an affair with her sister's husband, Gina's lost her job, Paula is having an identity crisis, and Margie just wants a date

Into their lives steps Miles, a cool businessman who made his first million before he was thirty and is now looking for a wife

On a series of hilarious blind dates in a sushi restaurant, Miles and the women go head to head in an attempt to define what it is men and women want these days

As in her previous comedy, Spike Heels, the author outlines the battle between the sexes with wit, ferocity and insight in a contemporary comedy of manners

"A heady blend of Noel Coward and Wendy Wasserstein.... Loose Knit has enough crackle to qualify as one of the smarter comedies of manners to be seen in New York recently. The triumph of Miles is that he is as charming as he is monstrous" ~ N.Y. Times