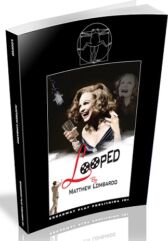 This zany comedy has been hailed as a masterpiece

It depicts an actual 1965 recording session in which an intoxicated Tallulah Bankhead required eight hours to dub a single line from her final movie Die! Die! My Darling!

Eight hours for a single line!

All the while driving the film editor nuts

The critics adored it ...

"This play is a masterpiece!" ~ Santa Monica Press

"Fours stars! A terrific play! The biting wit is bawdy and hysterical!" ~ The Washingtonian

"Scores of zingers, one-liners, retorts and anecdotes leaves the audience roaring so loud the actors often struggle to be heard!" ~ Daily Variety

"Matthew Lombardo's riveting new play is as funny as it gets in theatre! A seductive, funny and frequently moving piece" ~The Hollywood Reporter

"A+ Matthew Lombardo's brilliant script crackles with a number of zingy one-liners! His screamingly funny play will have you rolling in the aisles!" ~ Palm Beach Post

"Pure theatrical magic! Scathingly funny! Deliciously inappropriate. Sometimes, the saying goes, you have to laugh to keep from crying. Try to fight either as hard as you can. You will end up doing both" ~ The Washington Times