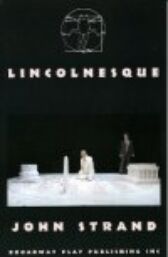 "Socially relevant without ever becoming preachy, clever enough to pass for cynical but also so subtly moving that its emotional payoff comes as a surprise, John Strand's new comedy is a political fantasy, a notoriously difficult genre, and it works, presenting politics in our nation's capital with a kind eye for human foibles and an unerring sagacity ... lets us laugh as we begin to grapple with some truly horrifying question" ~ Octavio Roca, Miami New Times

" ... a fascinating and philosophical exploration of what it takes to survive in an insane world; when and by what means we check out; what is truly important; and what is wrong with politics and, by extension, America. Strand manages to imbue his characters with humanity and the ability, however obliquely, to address these issues" ~ Charlene Baldridge, San Diego News

The insights about war, politics and our undying need for a hero really hit home

My husband and I discussed the play for hours; like Francis, we couldn't agree on the line between fantasy and reality" ~ Pat Launer, K P B S/National Public Radio