Lazarus - The Complete Book and Lyrics 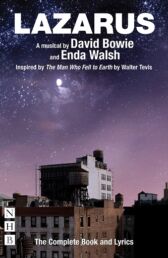 Large Mixed Cast
Written with acclaimed Irish playwright Enda Walsh, this is Bowie's musical adaptation of the cult novel and film The Man Who Fell to Earth

Years later he's still stranded here, soaked in cheap gin and haunted by a past love

But the arrival of another lost soul brings one last chance of freedom ...

Incorporating some of Bowie's most iconic songs, Lazarus brings the story of Thomas Newton to its devastating conclusion

"Ice-bolts of ecstasy shoot like novas through the fabulous muddle and murk of Lazarus, the great-sounding, great-looking and mind-numbing new musical built around songs by David Bowie" ~ Ben Brantley New York Times