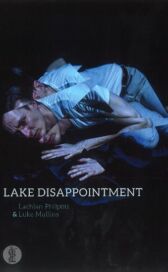 ** 10% DISCOUNT ** "Kane and I were both rising stars. I was rising to the top of the hand-modelling world and Kane was doing his plays. Kane got his first action film and I became his double. We clicked. Everyone said so"

Kane is one of the world's biggest movie stars

His body double has been there from the start, sharing more than just looks with his famous counterpart

Lake Disappointment is an unusual new work about ego, self-fashioning, and illusions