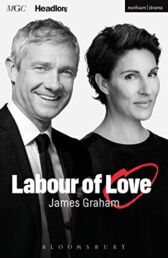 His constituency agent, Jean Whittaker cares about principles and her community

Set far away from the Westminster bubble in the party's traditional northern heartlands, this is a clash of philosophy, culture and class against the backdrop of the Labour Party over 25 years, as it moves from Kinnock through Blair into Corbyn

"... unexpectedly proven to be box office gold" Time Out

"It is in fact startlingly funny, peppered with one-liners and jokes" ~ What's On Stage

"And what makes this such a good and gripping piece of theatre is that it doesn't preach us sermons about press ethics but leaves us to draw our own conclusions ... It strikes me as a first-rate play" ~ Guardian

"...diligently researched and informative ... an inventive hybrid of Much Ado About Nothing, Yes Minister and Stephen Sondheim's Merrily We Roll Along" ~ The Evening Standard