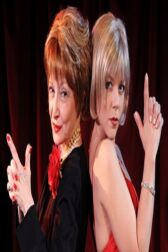 Kitty is having one of her pretty days

A Texan, she came to New York for the Manhattan created by Woody Allen

She's still finding her way in the big, grimy playground and being a pretty girl isn't all it's cracked up to be

An immigrant from Portugal, Lina escaped her arranged marriage and forged a career in publishing

Now retired, she finds there are new challenges for women of a certain age

"Grand sets and high-kicking chorus lines are nice, but a simple idea well executed is all you need for an engaging evening of theater. 'Kitty and Lina' at Manhattan Theater Source fills that bill nicely. Manuel Igrejas pairs monologues by women at opposite ends of the generational spectrum, each telling a story of trying to make a place for herself in unforgiving New York. Mr. Igrejas, in his two scripts, paints keenly observed portraits of women watching themselves disappear. A gem" ~ New York Times