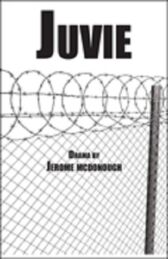 And also for civic awareness programs

It's set in a juvenile detention center

As each young suspect is brought to the Center, they act out their crime and their feelings both during and after committing the crime

"Juvie depicts the life of kids that are scared, lonely and locked up. Some are drug offenders, some have killed and some are just misfits ... Although the set never changes, the 'juvies' venture out of their cells to tell why and how they were caught. The barren cell and lack of props are effective and in keeping with each character's desolation" ~ San Jose Spartan Daily