Just in the Nick of Time! - A Detective Red Mistletoe Mystery 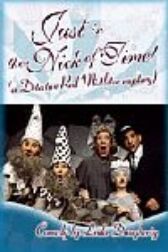 Large Mixed Cast
In this Christmas whodunit, ace detective Red Mistletoe is retained by the citizens of the North Pole to find Santa Claus, who has disappeared at the height of the season

If losing Santa wasn't enough, the previously colorful citizens are losing their Christmas spirit and their holiday hues

As Christmas draws near, the Elves, rather than carefree in color, are glum in gray

Doctor Green, no longer sporting green, is bitten by a reindeer

And the costumed children, rehearsing for Mrs Claus' annual "Santa Send-off Celebration," begin to look like they're in an old black and white movie

So it's up to Detective Red Mistletoe, now in shades of gray, to get some answers in black and white

Do they really hail from the South Pole as they claim?

Can Red save Santa in time to bring a colorful Christmas to the children of the world and even find a little romance along the way?

Of course he can - Just in the Nick of Time!

With easily accomplished costume changes, turning characters from colorful to colorless and back again, lots of parts for children and teens, a mystery to solve, a comedy with witty dialogue and plenty of holiday warmth, this show is perfect holiday fare for kids and families