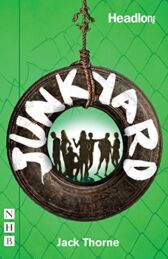 It's 1979 and there's rubbish on the streets

And it's tricky being Fiz

She's got no money

And her mum thinks she's a waste of space

But Rick remembers what it's like to be a teenager

It takes everything he's got

But when it's finished, it's going to be something

It's going to be everything ...

Honest and witty, with an vivacious ska-revival music score by Stephen Warbeck, Junkyard premiered in 2017

'A heartfelt new musical ... energetic and fun" ~ The Stage

"A touching tale an engagingly ramshackle musical" ~ The Times

"A rallying cry for the celebration of imagination, and the value of that above all. It is warm and funny, and I can imagine it could be inspiring to young people who need to be reminded that their voice matters" ~ Exeunt Magazine

"This is not your usual West End musical fare. The songs here flow in and out of the dialogue effortlessly and add subtle depth and warmth to the characters" ~ The Reviews Hub

"A joyful musical for school misfits ... left me smiling throughout as it celebrates the right of children and young people to turn their individual lives into an adventure through physical and imaginative play" ~ Guardian

'Highly entertaining ... [has an] anarchic, playful free-form spirit ... Thorne's script is genuinely funny and poignant while composer Stephen Warbeck's score has its pulse on the ska revival of the late '70s " ~- WhatsOnStage