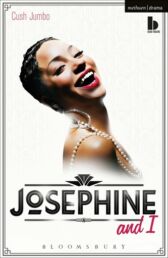 One-woman show about Josephine Baker - captivating performer, political activist and international icon, who lived from 1906 to 1975

From the ragtime rhythms of St Louis and the intoxicating sounds of 1920s Paris, to present-day London, Josephine and I intertwines the story of a modern-day girl with that of one of the greatest, yet largely forgotten, stars of the twentieth century

Music combines with dance to bring to life the contemporary legacy of a woman Ernest Hemingway described as " ... the most sensational woman anyone ever saw, and ever will"

"Ingenious ... a sparkling show with a light touch and a big reach" Sarah Hemming, Financial Times

"An exploration of the difference a black woman can make - now as well as then - and, incidentally, a celebration of the power of theatre to tell the human story ... sensational ... Shocks, surprises and political points are deftly popped in among the laughter and the glitz" ~ Heather Neill, The Stage

"An exhilarating whizz through the star's life ... From the ingenious trickery of its opening scene ... to its half-triumphant, half-elegiac ending, Cush Jumbo's solo show, based on the life of Josephine Baker, effervesces with energy and charm ... by turns funny, touching and thought-provoking" ~ Jane Shilling, Telegraph