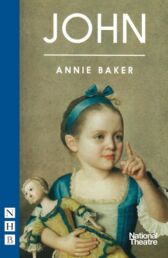 It's the week after Thanksgiving

A bed and breakfast in Gettysburg, Pennsylvania

A young couple struggling to stay together

And thousands of inanimate objects

This strange, uncanny play was first seen Off-Broadway in 2015 and had its UK premiere at the National Theatre, London, January 2018

"John" is a haunting and haunted meditation on topics Baker has made so singularly her own - the omnipresence of loneliness in human life, and the troubled search for love and lasting connection" ~ Charles Isherwood - New York Times

" ... so good on so many levels that it casts a unique and brilliant light ... By not rushing things-by letting the characters develop as gradually and inevitably as rain or snowfall - Baker returns us to the naturalistic but soulful theater that many of her contemporaries and near-contemporaries have disavowed in their rush to be 'postmodern" ~ New Yorker