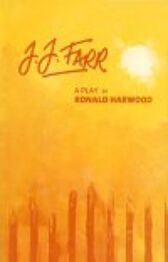 The theme of this play is religious faith in crisis. J.J. Farr, a former Roman Catholic priest, has been held hostage and tortured by arab terrorists

"Not since Graham Greene gave up agonising about the Catholic dilemma on stage back in the 1950s can there have been a drama so single-minded in its determination to discuss the loss of religious faith and its rediscovery ... elegantly and sharply written..." ~ Sheridan Morley, Punch

"J.J. Farr ... is gripping; it exerts the hold of all deeply felt personal argument..." ~ Sunday Times

"...could not be bettered for its mixture of comedy, drama and debate" ~ Sunday Telegraph