It's a Killer Life - An Interactive Murder Mystery Game 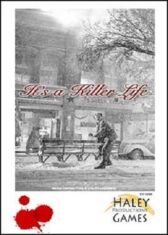 But there are exceptions

Henry Putter being one of them

But surely Henry wouldn't want to wreak havoc at the town's holiday celebration, would he?

Oh yes, he would

Big trouble is coming to this party

So come only if you dare

NOTE: PG rated - It's set in 1947 so Guests can be encouraged to wear Vintage, but you can do a modern day version if you prefer

THERE ARE 8 PRIME SUSPECTS:

Henry Putter, Jr
Bellows Falls' very own gangster - a mean, vile, greedy bully who doesn't give a hoot about people or anyone other than himself

George Bailey
He's no Jimmy Stewart. Not even close. He's a follower, not a leader. His wife is the strong one and the love of his life. But now she's threatening to leave him. And he'll do anything to win her back

Mary Bailey
George's wife - or soon to be ex-wife if she has her way. Oddly, she thinks that all women are after George, especially Violet

Violet
A local girl and vixen. She wants to go to New York City to become an actress just like Veronica Lake

Clarese Oddbody AS2 (Angel, Second Class)
Clarese thinks she's an Angel put on this earth to save Mary. If she does, she'll get the wings she's been waiting 293 years for

Harry Bailey
George's younger brother. Since returning from the war, he's been a bodyguard and stagehand for the Clooney Sisters tours. He recently married Ruth

Uncle Billy
Mary's sweet, befuddled, loyal, loving uncle. He feels responsible for and is very protective of Mary now that her dad Peter has died. Especially because he lost the last loan payment they were supposed to make to Mr. Putter on the same day Peter had his fatal heart attack

Remember, EVERYONE will be actively involved in this mystery because it will be their job to solve the case and because you'll be encouraging them to come in costume and in character

They'll roam the room "gossiping" about the goings-on and quieting the audience down during a main action as well as answering questions, bring primary suspects to tables for questioning and making sure your guests have seen the physical clues that have so far been revealed

THE SECONDARY SUSPECTS ARE:

Ernie Bishop
Ernie is a local cab driver with a heart of gold. A good friend of George's, he's saddened to see George and Mary's marriage in trouble

Bert the Cop
Ernie's best friend. A good man but a dumb cop

Almira Sessions
Putter's harried, obsessive-compulsive secretary, always at his beck and call. And she's in love with him

Cousin Tilly and Cousin Eustace
Tilly and Eustace are two of George's maiden cousins who work for Hatch Manufacturing. Tilly is timid and Eustace is a gossip