It's A Hit! The Backstage Book of the Longest Running Broadway Shows 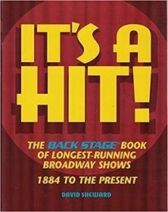 Filled with absorbing theatre lore and vintage photos, It's a Hit! relates the history of the Broadway theatre through the story of its most popular and successful shows

Spanning more than a century of American theatre, this is the first book to survey all the musicals, comedies, dramas, and thrillers that have run 500 or more performances

In fact-filled profiles, author David Sheward, Managing Editor of Back Stage, tells all about the unique events surrounding the creation and staging of each show, the personalities involved, the press reactions, and the subsequent touring productions, motion pictures, and telecasts that were derived from the Broadway hits

Trivia buffs will love the numerous behind-the-scenes anecdotes about the authors and songwriters, the producers and directors, and, of course, the performers - stars who captured the spotlight, burlesque and vaudeville veterans, hard-working chorus members, and scene-stealing unknowns

A final section is devoted to the hits of off-Broadway, and important awards like the Pulitzers and Tonys are highlighted as well.