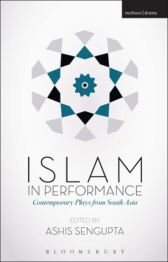 Islam in Performance brings together six contemporary plays from Bangladesh, India, and Pakistan that highlight the political performance of Islam in South Asia, especially since the 1947 partition of the subcontinent

The plays invite comparison with one another, engaging with the issue from perspectives of the three countries concerned:

And the ever-increasing Islamist threat to Bangladesh's founding secular ethos

Finally, this Anthology focuses on the suffering such exclusionary politics of religious nationalism has piled upon minorities across the region

Widely performed but largely unpublished, the plays with their geographic and stylistic range provide a good spectrum of some of the best writing in contemporary South Asian drama

The six plays in the Collection are ...

The Djinns of Eidgah by Abhishek Majumdar